‘After a series of last minute repairs we loaded up the car to headed to the only purpose built drift track in the UK – Driftland! I was looking forward to getting on track and getting some seat time before the main event on Saturday.

Unfortunately, our first day of practise was filled with rain. We managed to get out on track at midday to practise with the Pro drivers and to observe the lines they were taking around the track. I was struggling to get to grips with the track for most of the day, we had changed the set up many times throughout the day but I just wasn’t entering fast enough. I would run shallow on clipping point 2 causing difficulties for the rest of the run. By the afternoon, I was able to run the wall so my line improved dramatically. I was now feeling a little more confident with the track. Towards the end of the day, the car was spanner checked for competition day and found the new rear arms had become loose at the camber adjuster. After lining these up again it was time to rest before a day of fierce competition.

The next morning, we were given two, forty-minute practice sessions to dial the car in. After previously testing the car in the wet, it would be difficult; as the circuit had dried out nearly completely by the time I went on track.
We adjusted the set up again after our first run and I felt ever more confident as qualifying time was upon us. Although I would have ideally liked longer to practise it was time to get back out on track to compete.

I was reasonably happy with my performance in my first qualifying run, scoring a 60.8. I struggled slightly with my second run, as I couldn’t carry the speed on entry to clipping point 2 leaving me with a score of only 59.

After an exciting two runs I qualified in 22nd place, ready for the battles.

For the top 32 battle, I was drawn against Matthew Denham in his powerful rear mounted turbo V8 RX8. Matt had been on great form throughout the weekend, qualifying in 11th place.

I was in the chase position for the first run. Knowing I had to keep with Matt from the start of the run because of his experience and engine power, I ran shallow to try and gain proximity on him around the track. Matthew would take the battle 7/3.

It was now time for the lead run. I knew I had to try and get away from the RX8 from the start. I ran shallow again for clipping point 2 carrying too much speed into the corner leaving my S13 in the tyre wall, leaving Matthew to take his RX8 into the top 16. The well matched pairing of an experienced driver and powerful machine.
I felt extremely gutted; left unsure if I had pushed too hard or if something had broken.

I was towed out of the gravel pit and returned to the pits for the end of my drift weekend. I was annoyed that my 2nd BDC event had ended prematurely but it was now time to focus on the next round at Teeside.

After the long journey home, while unloading back at the garage, we noticed that the near side rear was out off alignment. After digging a little deeper, we found the rear toe arm thread had stripped causing trouble going sideways and causing the car to want to straighten throughout the run, potentially toeing this tyre inwards. Our swap to the more grippy Westlake tyre emphasised our issue further.

It was now time to focus on improving the S13 and the following round in Teeside in the near future.

Congratulations to the Shanahan’s for achieving 1st and 2nd on the podium. Carter in 3rd will make it all to play for at round 5 in Teeside.

I would like to once again thank Funk Motorsport for their on going support.’ 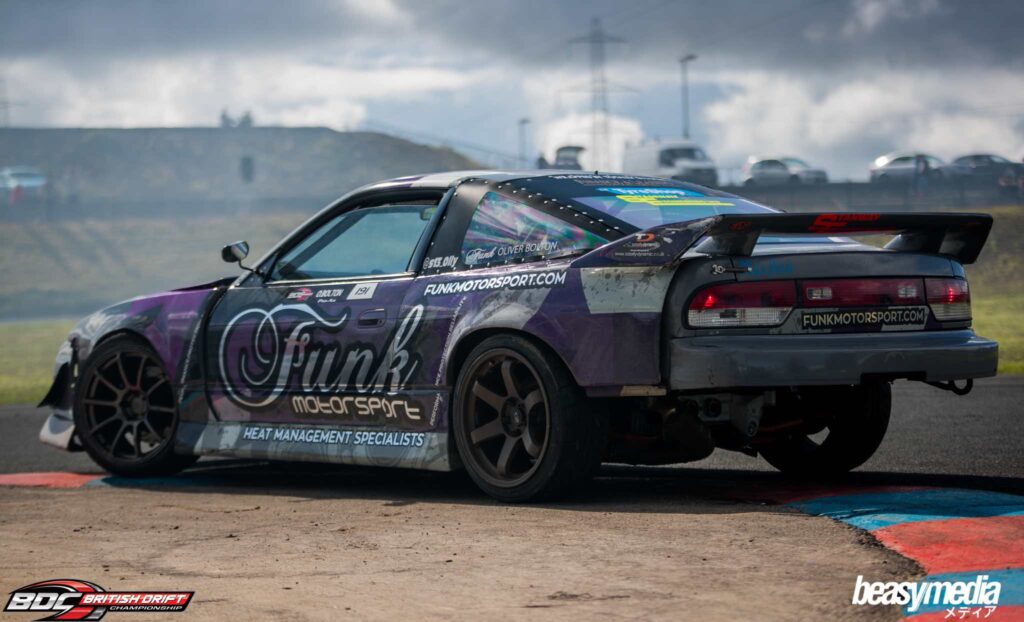