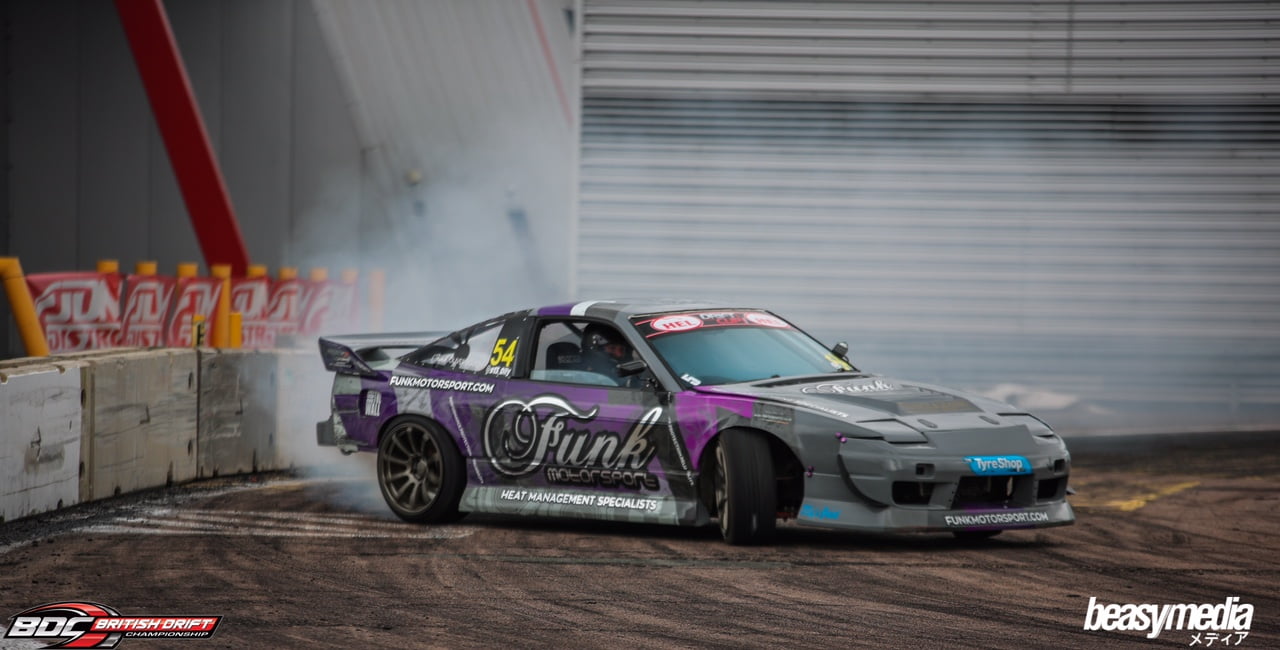 After weeks of anticipation, the British Drift Championship at the NEC had arrived. With the battle of Britain at stake between the BDC and Drift GP, Funk Motorsport Drifter Oliver Bolton was chasing his BDC license.

‘We had made it. The British Drift Championship had arrived at the NEC in Birmingham!

As per usual we arrived late Friday evening missing practice. We unloaded the car and headed to our hotel for the night.

Arriving back in the pits at 7:30am we walked the track to get a feel of what it was going to be like. The pits were buzzing, full of so many impressive pieces of machinery! 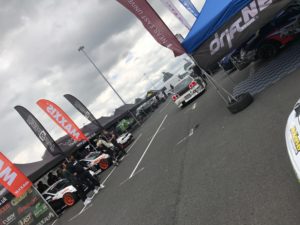 Briefing came soon enough, the judges showed us what they were looking for. As most had tested the day before, I really needed to listen out for the tips on what to do, and also, what not to do. The track itself looked fast and there were concrete walls nearly all the way around the track. If you made a mistake you were definitely going in to them hard!

Before the practice session was about to start, the car had to be scrutinered as everyone had been signed off on Friday. After a short time we had found a scrutineer but the car failed because the isolate cable on the outside of the car snapped, stressed out that I won’t even be able to get on track, we spent the next hour and 45 minutes to try and find a cable and fix the issue. This unfortunately ruined most of our practice sessions. With 15 minutes left and the car finally declared fit, we got straight out on track and only managed to complete 1 run before the car stalled. We towed the car back to the pits and found an intercooler pipe off. An easy fix but unfortunately allowed for no extra practice time.

Feeling unhappy that I had only had 1 practice run, I felt that I had not had enough practice to get used to the track in such a short amount of time. When my qualifying opportunity arrived it wasn’t great, I was shallow on clips and even straightening up in places. For my second run, much was the same, maybe a bit better, but not as good as it could have been, scoring a 40.1.

I was confident that I hadn’t made the grade to get the licence. We watched and waited while everyone put in their laps. As we all went back to our pits I heard a marshall call over to us to tell us that we had qualified 27th! I had gained my BDC pro-am license, which was really unexpected after the day I had. I felt over the moon!

My first battle in the BDC against Hayden in his E36 compact!

Both my lead and chase runs were scrappy and Hayden hungry to win! Fair play to him! He progressed to the top 16. Even though I had lost my battle, I had achieved my goal! I was a part of the BDC.

The British Drift Championship at the NEC was awesome! Bring on round 4 at Driftland. I can’t wait! Make sure your there!

Continued thanks to my title sponsor, Funk Motorsport for their continued support.’

For more information on the next round of the British Drift Championship, visit https://www.thebritishdriftchampionship.co.uk

To read more about Oliver’s journey to the BDC visit https://www.funkmotorsport.com/oliver-bolton-discusses-drift-cup-win/