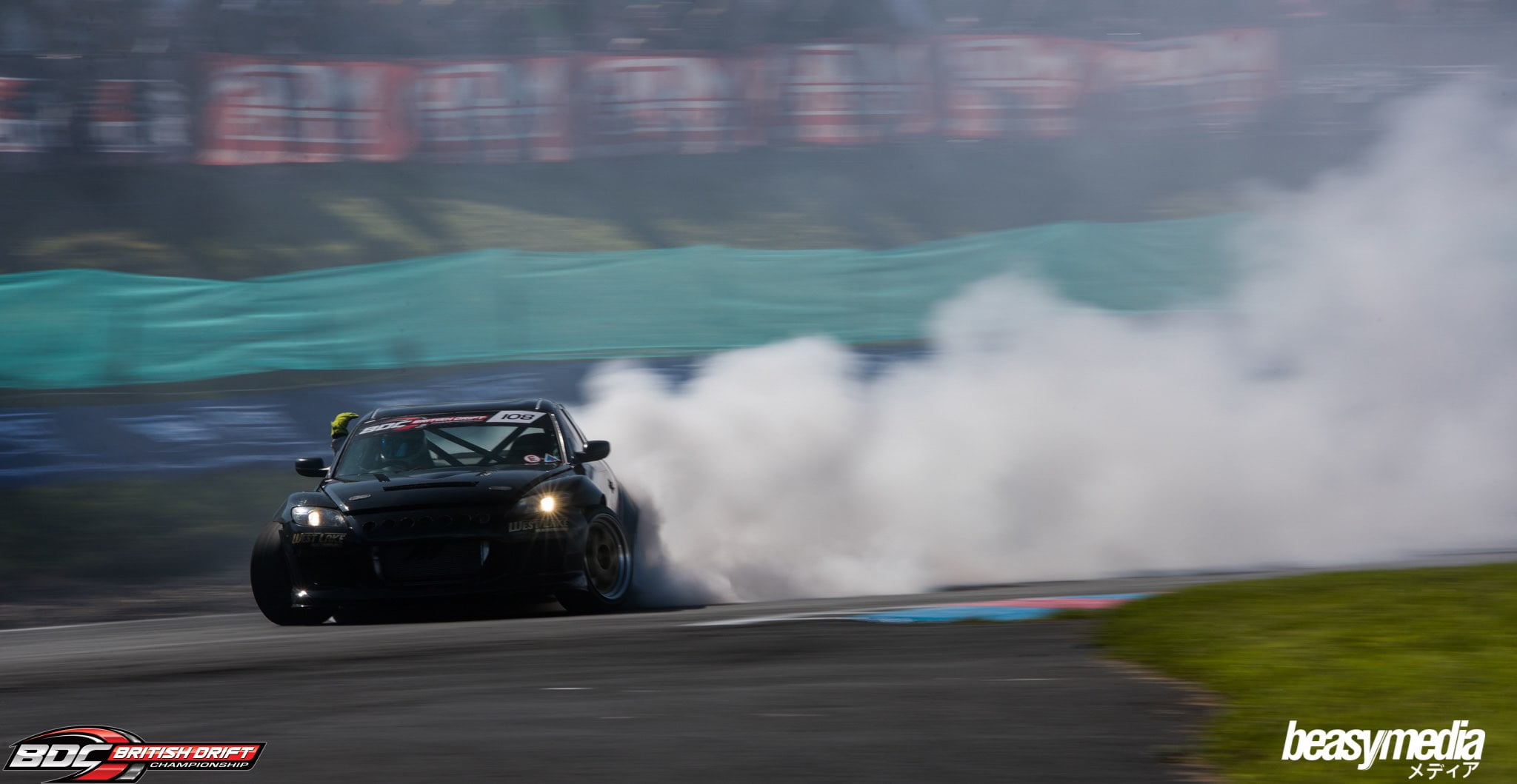 As the latest addition to the Funk Motorsport sponsor roster, Matt Denham in his turbo Mazda RX8 is kicking up a

storm in the BDC.

Matt is a 30 year old driver, living in Cheltenham who has only been drifting for a few years. As a director and co-owner of RDX drift academy, he spends most of his time at Rockingham race circuit.

Matt’s car is a purpose build RX8 with an LS engine, LS3 heads, iron block and LS7 bottom end featuring a dry sump built by Kyle Rushal. The turbo is famously positioned under the rear bumper, with the boost pipe running through the car. It is the only build of its kind in the drifting world. Wrapped in Funk Motorsport’s Reflective Gold Heat Tape the iconic boost pipe runs right through the car. All of the internals are forged.

The car is maintained at Richards Racing in Pershore by owner and Driftworks driver Martin Richards.

A lot of development has gone into the car this year and reliability has been an issue. Matt has had three top eight finishes and has been wiped out by technical faults each time.

In his last outing at Driftland, Matt had an electrical issue due to a voltage drop causing him to retire from the battles. Martin has tackled the initial overheating problem by adding water/methanol injection, a larger radiator and fans alongside Funk Motorsport shielding and insulation.

Funk Motorsport products have led to a huge improvement in the cockpit temperatures leading to Matt now being able to hold the hydro hand brake which was previously too hot to touch. The whole car is now much less of a furnace. The team should now be eligible for a grant for reducing global warming and helping polar bears.

This year, with the new Westlake semi slick tyres and roughly 700bhp, there have been many drive train issues

facing us. Martin has replaced the gearbox with a T56 Magnum, worked on by Ben from Straight to the Point Racing. With a new clutch from extreme and a differential and reinforced mountings from Huxley motorsport, the car is performing much better.

Matt is known as an exciting driver to watch, referred to in the BDC as the gentleman of drifting, until he puts his visor down.

Lying joint second for the last round of the BDC at Teeside, Matt is hoping to get podium and bubbles including his pro license for next year.