Turbo blankets are becoming a wider used product throughout the automotive tuning and motorsport worlds, focusing on the performance market – though traces of these products can be see across mainstream Car Manufacturers and OEMs worldwide. Turbo blankets or otherwise known as “turbo socks” or “turbo jackets” are exactly that, they are designed to increase performance from the cool side of the turbo by covering the hotter turbine housing. These blankets also ensure consistent and efficient running from the turbo charger’s compressor components. This will be covered in further depth later on.

All engines work at their optimal when cooler air is being fed into each cylinder. All modern vehicles use a huge variety of sensors to determine airflow, air pressure and intake temperature – each will play its roll to actively adjust the fueling to ensure optimal running and engine longevity is sustained. In order to keep the intake temperatures down on a turbo vehicle, they run the airflow through an intercooler or charge cooler to drop the temperature of the once compressed gases. This is all well and good, but none of this changes overall turbo design – Effectively we have an extremely hot side of the turbo that is driven directly by exhaust gasses that have only just exited the combustion chamber, literally centimeters from the compressor half of the turbo in which works at optimal when it is cold. The heat naturally wants to transfer from the hot side to the cold side of the turbo resulting in reduced performance and efficiency. 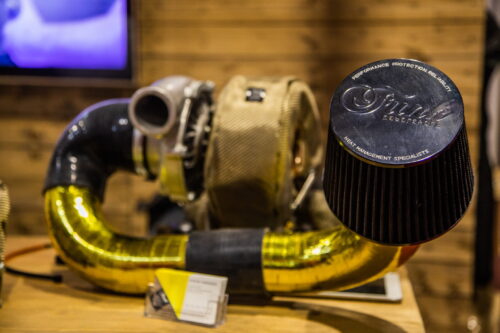 For many years, cars were designed to operate using the Internal Combustion engine in conventional Normally Aspirated (NA) states. Meaning that the engine itself will create the vacuum required to supply the designated air flow for the desired fuel flow. This is a relatively simple design with few components and low complexity engine management and pipework routing within the engine bay itself. As cars became more complex, the NA engine design nears closer towards the peak performance that it can produce given its constraints – engines produce a negative air pressure in the cylinder head created from the pistons travelling up and down. This negative pressure sucks air from the intake manifold, mixes with the fuel flow and so creating combustion within the chamber. The bigger the bang, the greater force pressing down onto the pistons, the greater the rotational force leading to the crankshaft – directly resulting in more power and torque heading into the gearbox and ultimately through the driven wheels. Naturally there are ways of making this process more efficient and thus increasing performance, maybe by increasing the internal bore of the intake/exhaust manifolds, creating an easier, smoother flowing route for airflow and increasing fuel flow into the chamber itself. Despite doing all of this, there are still limitations on how much performance can be extracted from an NA engine. Engineers begun finding mechanical methods to force more airflow than naturally possible into each cylinder. This lead onto more complex methods such as Turbo charging (using exhaust gases to power a turbine that is used to suck air into the engine) and Super charging (using a crankshaft driven belt to turn a compressor wheel and suck air into the engine). The forced induction era was born and becoming more and more common with every new car that is built – specifically turbo charging. Turbos can be upgraded to aid power production in a huge variety of ways in addition to that of how you would traditionally tune an NA engine.

How this has been addressed?
Imagine a component that can be fitted AFTER the car is built, and fitted in a matter of minutes. These are turbo blankets – designed to keep the hot side HOT and the cold side COLD. A high temperature material is created to shape of your turbo, to reduce the heat soak between the two vital halves of the turbo. This will create a snug fit around the turbo to reduce the under bonnet temperatures dramatically and therefore actually help extend the life of all sensitive components in the area! Turbo Jackets work two fold, by keeping the heat contained within the turbine (hot side), the cases actually increase in velocity, creating a faster spool up time!

Don’t just take our word for it, Turbo blankets, jackets or high insulation is used by OEM manufactures worldwide including McLaren Automotive, Aston Martin, Radical and so on.

Want to see what a Funk Motorsport Turbo Blanket looks like?

Our blankets can be found here:

We have the Turbo Blanket for you, each turbo blanket has been designed to fit snuggly with any blanket. To find the perfect one for you, we have produced a sizing chart for each variation.

Click your desired blanket to see the sizing illustrations!

Already know about turbo blankets and how they work? Just want to know best Garrett Turbo Blanket?  or what Turbo Blanket for your Precision turbo? Just drop us a message, we would be happy to use our extensive knowledge to find the correct blanket for you.

Funk Motorsport, we have been producing Thermal Protection products for the best part of a decade, If you have a custom requirement, we would be happy to help point you in the right direction or create something to keep your heat management in check!